Meet Us
About AndinoTrek
Our Team
Contact
Latest News


The Peruvian city of Huaraz boasts a stunning location high in the majestic Andes surrounded by the impressive glacier peaks and mountains of the Cordillera Blanca (white mountain range) and Cordillera Negra (black mountain range). The city itself is situated in a valley at an altitude of 3100 meters above sea level. Some of the peaks overlooking Huaraz rise above 6000 meters, including Huascaran which is the highest mountain in Peru at 6768 meters. Breathtaking views of the snowcapped mountains are seen from Huaraz, creating an inspiring backdrop for the array of outdoor activities the area is renowned for. Huaraz is the hub for trekking opportunities, mountaineering, rock climbing, mountain bike riding, and a host of other adventure sports in the Cordillera Blanca and Cordillera Huayhuash. The city itself is home to around 100'000 people, including a large indigenous population. Many locals still wear traditional clothing unique to the region, particularly the women who are adorned in beautiful skirts, tops and hats and often seen carrying infants or produce in brightly colored slings tied to their backs. Huaraz is fairly compact and well laid out as it has been entirely rebuilt following a disastrous earthquake in 1970 which destroyed the city. It is easy to explore by foot or by doing it the local way and hailing one of the many mototaxis or collectivos (small minibuses) which operate throughout the city and travel to all surrounding villages. 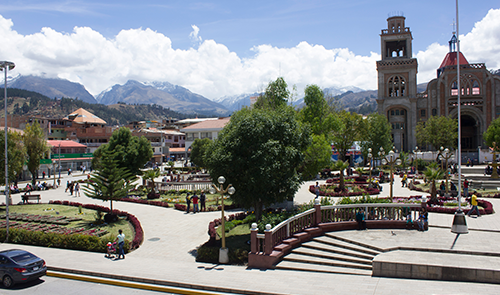